Palliative care aims to offer comfort and support to patients and their families including caring for emotional and spiritual needs. The overall aim of All Ireland Institute of Hospice and Palliative Care (AIIHPC) is to improve end-of-life care in all of Ireland which led to the “Let’s Talk About” initiative.

The realities of living with a progressive, long term incurable condition is a difficult but necessary conversation. Using the experience of users and carers in shaping the delivery of human services is referred to as “experience shaped design”.

The “Let’s Talk About” survey had three sections:

Comparison of cancer and non-cancer responses

The survey data allowed for comparisons between people’s experiences of palliative care according to their condition or illness. Two distinct groups were compared – those whose condition(s) included cancer and those whose condition(s) didn’t include cancer. The family and close friends of the non-cancer group expressed feeling a lack of support as their stories indicate they were less likely to be involved or respected and felt that they were put under too much pressure. Perceived barriers for non-cancer patients in accessing palliative care included the unpredictability of the disease, difficulties with referral criteria and the lack of disease specific expertise. 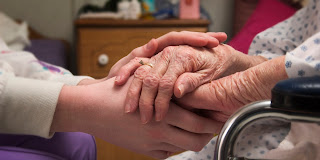 Identifying themes by analysing the stories told by the survey respondents allowed for the data to be categorised. There are sub-themes within each category of these three broad themes:

The survey responses provided rich data and indicated that personal experience of palliative care, both good and bad, revealed key themes. Of the 528 respondents 68% indicated that planning for the future was their biggest worry while over half felt frustrated or helpless. At least one in three felt they had too little autonomy and one in five revealed they felt that their family and friends were excluded. Too little and often too late was the response to questions on information provision by over one third and almost a quarter felt that sensitive issues were avoided altogether.

Some key areas for improvement identified by this AIIHPC study were that:
• Avoidance of talking about the issues increases frustration and helplessness
• Information given too little, too late increases frustration and helplessness
• Clear and sensitive communication increases the feeling of being supported
• Ability to make choices increases the feeling of being supported
• Better co-ordination of care and treatment helps with physical symptom management

Even though Ireland is ranked in the EU top five for palliative care according to Gary Culliton in the Irish Medical Times on June 17th, 2016 the head of the AIIHPC, Karen Charnley, highlights the need for healthcare professionals including GPs, nurses and medical consultants, to build communication skills around talking openly and sensitively about care issues. The survey was jointly commissioned by theHSE in the Republic of Ireland and Public Health Agency (PHA) in Northern Ireland. The recommendations included in the report have implications for policy makers, for professionals and for society.

Posted by RCSI Library at 10:45 AM No comments: