Guest Blog: Publish or Perish: The Travails of Publishing Open Access for the Modern-Day Clinician

For Open Access Week 2021, we asked one of our medical students who has published under our Open Access agreements, for a personal view on open access. Talal Almas is a final year medical student with over 100+ published manuscripts, abstracts, posters, and book chapters. While he fosters diverse research interests, his main work revolves around cardiovascular research outcomes. He later aspires to become an interventional cardiologist, using data-driven research to govern his own clinical practice in improving patient care.  He can be found at Facebook: talal.almas and Instagram: @talalalmas

To find out more about Open Access including our current agreements see https://libguides.rcsi.ie/researchsupport/openaccesspublishing. As well as publishing through OA publisher agreements, making a version of an article available as green OA has also been shown to improve citation performance. To find out more on how to submit to the RCSI Repository see https://libguides.rcsi.ie/repository

The exorbitant barriers to publishing open access continue to deter countless clinicians, researchers, and aspirants such as myself. In the modern day, the scientist often finds himself at the brink of a pressing yet time-sensitive conundrum: to publish research at the astronomical cost of thousands of dollars, or to remain sated with publishing under non-open access options. While the latter might seem like a no-brainer at first, the intricacy of the decision at hand becomes more conspicuous when one considers the ramifications.

The ability to publish open access allows a researcher to disseminate their research to the scientific fraternity at an exponentially higher rate, dramatically increasing the outreach of a specific published article. In my personal experience, for instance, it is indubitable that articles published under open access agreements have, indeed, garnered a mounting number of citations, reached wider audiences globally, and elicited an exceedingly greater impact than their non-open access counterparts. Over the course of the past year, I have had the utmost privilege of leading and publishing a vast array of research projects under the open access license. This has been possible through the numerous open access agreements that RCSI has partaken in within the recent times. For a medical student with very sparse resources, and virtually no funding for any of the projects, such agreements have been pivotal in facilitating the scientific prolificity that I have been so lucky to foster over the past one year. Considering that the cost of publishing an article open access can range anywhere from 1000 USD to 4000 USD, publishing even an immaculate piece of scientific literature poses an insurmountable challenge to a medical student with sparse financial means. My research team, formed through extensive transnational collaborations, is left to convalesce, often being called upon to contribute a share towards the overall publication costs. Over time, such costs, even when divided amongst the authors, can accrue and amount to astronomical values, frequently deterring budding and exuberant scientists from publishing their astounding research.

With the perpetually-evolving scientific milieu today, clinical innovation and transparency, particularly gleaned through a researcher’s publication output, have become more instrumental than ever before. In the modern day, the number of publications and citations a researcher garners across their publications often govern their scientific fate. In this context, publishing open access becomes somewhat of a necessity in order to bolster the likelihood of procuring more citations. For a medical student such as myself, open access publications foster a culture of increased transnational collaborations, which subsequently increase the overall research output. Indeed, were it not for the open access publication agreements that RCSI has recently become a part of, a myriad of the research projects would not have spurred to fruition, transnational collaborations would not have been feasible, and monetary concerns would have become the bane of my own scientific prolificacy. I am therefore utterly grateful for these agreements and to all that they have facilitated in my medical career thus far. I am equally grateful to all my collaborators, peers, and colleagues, who have all supported our research projects—cognitively, emotionally, and financially—in times prior to the advent of the aforesaid publishing agreements.

Fortunately, I have continued to publish meaningful research, curate clinically-relevant research questions, and spur the data obtained to fruition so that we may be able to contribute towards ameliorating patient care—someway, somehow, someday.

Posted by RCSI Library at 3:09 PM No comments:

It is now possible to submit publications from your RIMS profile to the RCSI Repository to make the full text available to all as Open Access. Many funders now require Open Access for research publications as a condition of funding. RCSI’s own policy also requires all journal articles and conference papers by RCSI staff to be added to the Repository, and encourages deposit of other material.

For RCSI Researchers looking to submit via RIMS 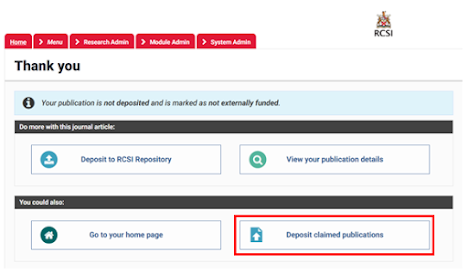 Just upload the PDF file of your paper and it will be transferred along with the reference details to the RCSI Repository. Guidance on the versions of papers that can be deposited can be found at libguides.rcsi.ie/researchsupport/openaccesspublishing

All items deposited will be checked and validated by Library staff before going live.

All items previously submitted to the Repository (previously known as e-publications@RCSI) remain available and do not need to be submitted again.

There is a new indicator in RIMS showing against all journal articles or conference papers published since 2019. This is to indicate publications which, under the RCSI Open Access Policy, are expected to have full text deposited in the RCSI Repository.

More detailed instructions on Where to Deposit and How to Deposit can be found on libguides.rcsi.ie/repository/submittingviarims

Posted by RCSI Library at 5:09 PM No comments:

BrowZine provides a user friendly interface for discovering, monitoring, reading and keeping up-to-date with online journal content RCSI subscribes to.  Use BrowZine on your smartphone, tablet, desktop or laptop to browse and organise favourite journals and full-text articles on your personal newsstand. Find out more about:

With BrowZine you can:
Browse and read journals:

Stay on track with MyArticles:

Save and export articles:


To get started using BrowZine, visit RCSI Library on BrowZine or download the app from the:


You will be asked to create a personal BrowZine account to use the MyBookshelf  and MyArticles features.


Once you have downloaded the app, you search for Royal College of Surgeons, Ireland and connect using your RCSI Network Username and Password. (this is your RCSI email prefix and the same password)

Learn how easy it is to use BrowZine in this brief video introduction.


Further information can be found on the BrowZine LibGuide.

Posted by RCSI Library at 12:04 PM No comments:

In line with government policy the RCSI campus, including libraries at York Street, Mercer Building and Beaumont Hospital are closed at present.

The campus may be closed but the library is still open with 24/7 access to e-resources and the library team providing expert services remotely.  Fuller information on library service arrangements are available at libguides.rcsi.ie/alertlibraryclosure


Please email library@rcsi.ie if you have any questions.

Posted by RCSI Library at 1:00 PM No comments:

Library Life is our weekly blog to let you know what will be going on around the library next week to help you plan your days and be aware of what is on.

If you have any suggestions of things you would like us to add to the blog for 2020 please get in touch: library@rcsi.ie 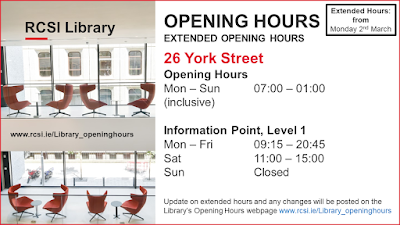 How do they work? Grab a bookmark when you come into the library or when you find your seat. When you want to leave your seat, fill in the date and the time you leave, and be back with 45 minutes!

If you are leaving your seat for more than 45 minutes, take your belongings with you or they might get packed up and moved to the concourse area on that floor - i.e. opposite the main lifts.

When can items be moved? Items can be moved when you have not followed the policy of noting the date and time you have left your desk, or if you are gone longer than 45 minutes, or if you put the wrong time on your bookmark, or if you don't use a bookmark at all.

Ask at the Library Information Point in 26 York Street for more information.
All Library Policies can be found on the Library Website www.rcsi.ie/librarypolicies 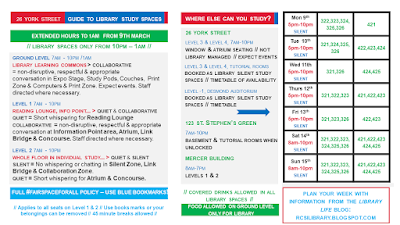 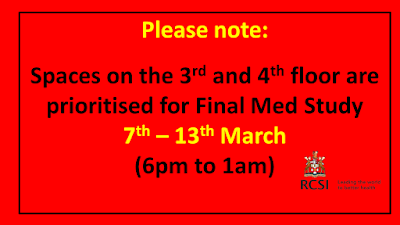 Library BiteSize Sessions: Skills Sessions to get the most from your library* 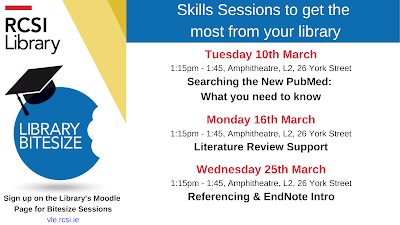 Keep an eye out here on our blog or on our Moodle page for updates.

*Check local signage for updates. Blog will be updated too. All information correct for time of publication.

Tours in 26 York Street this week:

In 26 York Street this week:

Do you have other news you would like us to highlight to Library users?

Any comments or thoughts on how we can make this weekly blog post more useful? Email library@rcsi.com.
Posted by RCSI Library at 9:04 AM No comments: